The Juvenile Center program incorporates cognitive behavioral therapy components that emphasize positive reinforcement. The Center can accommodate 15 boys and 10 girls, between the ages of 12 and 18, who have been adjudicated delinquent. The program consists of a five level zone system, namely Orientation, Zones I, II, III, and Transition.

Orientation Zone consists of 15 earned days and is the most restrictive zone. During this zone, the youth becomes acquainted with the program; undergoes various assessments; learns to consider the consequences of his actions and the affect on others; begins to learn how to make responsible decisions through skill streaming groups; begins to work on the victimization component of the program; begins to address anger management issues; and begins mental health and drug and alcohol counseling.

Zone l consists of 30 earned days. During this zone, the youth begins to address the thinking barriers that lead to errors in his behavior; continues learning how to make responsible decisions through skill streaming groups; continues to address anger management issues; begins family counseling; and continues participation in all counseling begun in Orientation Zone.

Zone ll consists of 40 earned days. During this zone, the youth's zone work is centered on teaching the youth to be a responsible thinker. In addition, the youth continues with all services begun in the prior two zones.

Zone lll consists of 50 earned days, four successful 4-hour passes and one successful 24-hour pass. In zone three a Case Manager designs the youth's zone work around his individual needs. Self esteem, thinking errors, drug/alcohol issues, anger management, life skills, and independent living skills are some of the issues that may be addressed in more depth.

Transition Zone consists of a minimum of 20 earned days and at least three successful 48 hour home passes. During this zone, a youth is reintegrated into his home school. During transition the Center continues to work on and monitor the youth's progress and behavior at both school and home. Once the staff is satisfied the youth is ready to be reunified with his family, the Center will notify the Court that all requirements have been completed. The Court will then schedule a release hearing.

Other components of the program include: 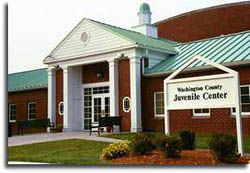